Wine-making in Armenia: from the Antiquity to the New Age

Cultivation of Armenian wine is very ancient and dates back to Noah’s ark times. Legend has it that Noah planted the first vineyard on the Biblical Mount Ararat where he grounded with his ark setting the cornerstone in the history of Armenian wine-growing.

Old paintings and hieroglyphics witness, Armenia was the most advanced wine-growing country in the ancient times, even exporting their products to the neighbours. The discovery of wine cellar with old amphoras and other shreds of evidence during the excavations in the region of Areni (area of Wayotz Dzor 120 km south-east of the capital Yerevan) in 2010 proved the existence of Armenian viticulture for more than 6000 years, thus the eldest wine-cultivating country in the world.

The answer to the question why Armenia continuously dwindled in importance as a wine-growing country is its knotty history.

In the 20th century, Armenia, being a part of the Soviet Union, became a favourite brandy producer. The significant part of grapes was processed into new wine still in fermentation, and as the next step distilled to brandy for the entire USSR. Under the brand name „Armenian Cognac“ this beverage found a stable place in the Soviet community and enjoys extraordinary popularity till nowadays. Until the end of the 20th century, Armenian wine-making remained utterly insignificant. Despite small production for private use, many vineyards decayed after the dissolution of the USSR.

Nowadays, Republic Armenia, which became independent in 1991, compasses approximately 17.000 hectares vineyard acreage. Most important wine-growing areas are Wayotz Dzor (935 ha), Armavir (7.136 ha), Ararat (5.143 ha), Aragatsotn (1.698 ha), Tavush (1.355 ha) and Artsakh. Despite dry continental climate and lack of precipitation, this country provides ideal conditions for the cultivation of wine. The vineyards extend up to an altitude of 2000 metres. Phylloxera-free soils are perfect for the ungrafted vines.

Indigenous grape varieties shape the specific nature of Armenian wine, mostly, for instance, Areni Noir, Kachet, Voskehat, Tozot, Haghtanak und Kharji. However, the red autochtonous Areni Noir appears to be one of most the important ones enjoying a widespread cultivation with a brilliant performance, calling the village of the same name its home.

The revival of Armenian viticulture started during the end of the 90s. Vintners, convinced of the vast untapped potential, were eager to build up a cultivated wine land awakening the ancient viticultural heritage of their country.

The beacon of this unfolding is the wine-growing estate Van Ardi, established by Varuzhan Mouradian in 2008 and located in the village of Sasounik, the province of Aragazotn. Despite its relatively young history, this vineyard ranks among the best in Armenia.

Mr.Mouradian, after an extended stay in California, you and your family decided to move to Armenia and to establish a vineyard – how did that happen?

V. Mouradian: During my stay in the USA, I recognised that, despite my excellent performance, my desk job had become so alien to me. I wanted to deal with something spellbinding and creative. Wine-making – that was what fascinated me.

Why exactly Armenia?  I have always been interested in understanding how a cradle of wine-growing with a thousand-year history became its downfall and is still a little-known wine-growing country. I thought it was time to turn back the wheel of history and to free the viticulture from centuries of dust. 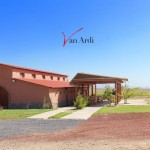 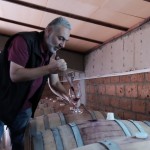 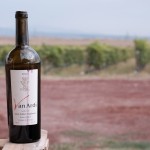 You are not just the owner of the wine-growing estate; you also make your wine on your own. We learnt that becoming an enologist was career jumping for you. What was your motivation for doing so?

V. Mouradian: Though I was not an enologist, wine-making was always of interest to me. I remember the times when I made house wine for my family in our garage, and I enjoyed it very much. The grape is a part of nature and winemaking is an entirely natural process. There was a moment when I felt the need to live and work in harmony with laws of nature instead of those of bookkeeping and taxes.

Would you tell us the story of the name Van Ardi?

V. Mouradian: Van Ardi means „Sun of Van“ in the old Armenian language. In antiquity, the Kingdom of Urartu (also known as the Kingdom of Van) was a famous wine-producing country, exporting wines to its neighbours Assyria and Babylon. The drawings of the Sun God of the Kingdom Van, preserved as hieroglyphs, is the emblem of Van Ardi.

You own nine hectares of land planted with autochtonous and international grape varieties. How many autochtonous varieties are native to Armenia? Which advantages and disadvantages do they possess?

V. Mouradian: Over time, we discovered that international wine markets were particularly interested in the indigenous Armenian grape types like, for instance, Areni, Kachet, Voskehat, Haghtanak, Kangun, Khardji. These varieties evoke wine aromas which are new in the world of wine. There are more than 400 autochthonous varieties in Armenia. However, many of them are lost to history. Today, there are only a few grape varieties available which are workable at present. I am convinced that scientific endeavours would help us to recover many of disappeared grape types. 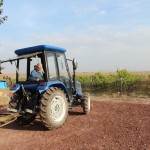 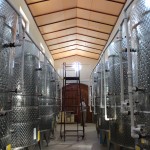 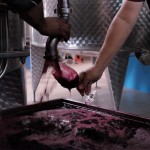 You have managed to achieve the top position among the best wineries in Armenia in the quickest time. Also abroad, your wines have an excellent reputation. Which countries do you consider to be attractive for the export business?

V. Mouradian: Yes indeed, we are happy that Van Ardi wines are very much in demand in Armenia and beyond its borders. All countries that recognise wine as a cultural asset are very attractive to become our export business partner – and there are plenty of them.

Mr.Mouradian, more and more foreign tourists are visiting your winery. How important is wine tourism for Armenia?

V. Mouradian: We are confident that wine tourism in Armenia is an inseparable part of the winegrowing with enormous potential. This place unites historical facts and legends like, for instance, Noah’s first vine seedling on the Mount Ararat, the 6000-year-old wine cellar in the province of Wayotz Dzor, the 5000-year-old cellar in Agarak and many other historical findings. If we take all those aspects into account depicting the magnificent history of the Armenian winegrowing in the present tense, indeed, it would not take long to show the success.

Armenian winegrowing experiences an intensive development stage. Wine quality has picked up significantly during the last ten years. Notwithstanding the limited land resources, what is your vision of Armenia as a wine-producing country shortly?

V. Mouradian: If I may go into detail on one point, I believe that Armenia possesses enough geographic, climatic and human resources to make a significant leap forward in the next ten years; likewise, we have witnessed it during the last five years. Yes, it will take toil and trouble to achieve it. However, my colleagues and I consider this process to be a pleasant lifestyle than work.

We would like to thank Mr.Mouradian for his time and exciting conversation!

Learn more about the results of Van Ardi wines during the PAR Wine Award International www.par-wineaward.com.

This article is a guest contribution by our esteemed colleague and wine advisor Satenik Samvelyan. Having her roots in Armenia, she lives in Germany since 2010, and currently works in the sales department of Consigliovini Weinhandelsagentur in Düsseldorf.