A place to taste art…

Slovenia is the Green Heart of Europe and one of the most prosperous wine-growing regions of its East. The eventful history of this country encompasses times of Holy Roman and Austro-Hungarian Empires, Kingdom of Yugoslavia and Tito’s communist rule. Slovenia, a country spectacularly uniting the Alps, the Mediterranian Sea, the Pannonian lowlands and the Karst, is a part of the European Union since 2004 representing its economic development in an exemplary manner. Experiencing a vibrant upturn since Slovenia’s independence, eventful 2400-year-old wine growing history of this country goes back to the Celtic period which is supposed to be the viticultural dawn. The settlement of the Slavs in the sixth century brought the florescence of the Roman age almost to a standstill. Medieval Christian convents helped to bring revival producing wines which enjoyed a great vogue at Court in Vienna. Nowadays, round about 26.000 hectares, mainly dominated by mountains and largely coved with forest, are in wine-growing production, spread out over regions of Podravje, Posavje and Primorje. While the Drava region with the beautiful city of Maribor – home of world oldest vine (400 years) – appears to be the biggest wine-growing area, Goriska Brda, located in bordering on Italy coastal region Primorje, is said to be the most developed one, covering 2000 hectares vineyard. This area gained this reputation due, among other things, the celebrity winemaker Ales Kristancic from vineyard Movia whose grandfather Anton was the only one who refused to deliver his grapes to the local cooperative in Dobrovo, which was obligatory since 1945. He kept selling his wine to private persons, gastronomers and later, because of its outstanding quality, even to the Yugoslav government. His in 1996 born grandson Ales learnt his handicraft at viniculture school in Italian Veneto and during his stay in famous chateaux in Bordeaux and Burgundy, returning home to enter wine-growing business ran by his father Mirko and becoming an innovation driver for Brda area, and possibly also for the whole wine region.

Katja Distelbarth and Matjaz Kramar, both artists and wine growers working in their Atelier Kramar, call this borderland between Slovenian Brda and Italian Collio home as well. Their products were successful participants in the last year PAR Wine Award International. A German from Baden-Wuerttemberg Löwenstein and a Slovene from Kobarid at the foot of the Julian Alps learnt each other at the Academy of Fine Arts in Venice. Being fans of the indigenous grapes like Rebula, they follow ecological principles in the vineyard, processing their white grapes to Orange wines, for instance, the silver awarded 2013 Bohem. In this interview, Katja Distelbarth reveals what was the trigger to extend their art to the vineyard and cellar, her view on the organic movement in Slovenia, and the incredible diversity coming from sturdy Rebula.

Mrs Distelbarth, both your partner Matjaz Kramar and you are educated artists. Why did you decide to dedicate your life to the art of wine growing?

K. Distelbarth: More or less it was a coincidence, definitely not planned.After graduating, we fell in love with this piece of land and an old house on it in Barbana. We thought it would be the perfect place and base for our art.To the property, formerly also belonged a few small vineyards, and this was the idea of Matjaz’s father to plant further more vines on some disused land. That house was not fit for renovation, so we planned a new one with a small cellar. After a while, it became apparent that winemaking required more attention so that we decided to change our focus with all its consequences regarding necessary documents, additional training and production space extension. 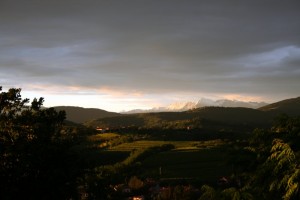 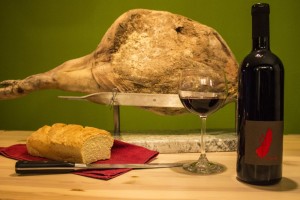 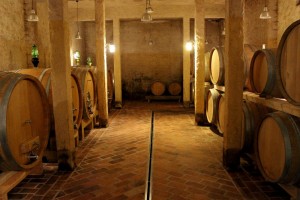 Was the 4,8-hectare vineyard area in Barbana already cultivated? Or was it a start from the very beginning? Which grape varieties do you raise now?

Rebula is a very old autochthonous grape variety from your region. Could you tell us a few words about its qualities?

The“Primario“ holds the taste of the region: 100 percent rebula *

K. Distelbarth:  Main features of this grape are the yellow colour and thick skin, the latter, alongside its bitter flavour, makes these fruits unpleasant in taste. This wine is neutral on the nose and can be produced in a different way (see below).

We learnt from your website that your wines are mainly created in the vineyard by applying the environmental principles. Would you mind to give us a brief insight?

K. Distelbarth: Well, we work pretty much according to the environmental guidelines. However, we are not registered as organically farming. We prefer to keep the little back door open in order to have a chance of using non-organic materials, which was not the case this year.Apart of this, our cultivation system is compliant with all environmental provisions, and we look forward to certification as organically working producer shortly. Except for spraying and mowing grass, everything is done by 100% handwork. We refuse using herbicides and mineral fertilisers, generally spreading manure from time to time. We pay much attention to the high quality of the grape which means very scrupulous working during the whole year. Approximately 1 kg of grapes ripens on each vine on average. Indeed we held every single grape in our hands before harvesting. We treat our vines with the same care and commitment like we would do this with a piece of art, however with the difference that we have to take on board wine growing essential factors, in particular, the climatic reasons of each year. Our wines contain a small amount of sulphur. In 2014 we stopped using yeast for the fermentation trying to keep the sulphur level as low as possible. Our wine is aged in wooden barrels in our cellar without ruffle or excitement with seldom racking and unfiltered bottling. Our white wines are Orange wines since 2015, which means several days of grape skin maceration.

Could you observe a growing interest for organic winegrowing in Slovenia during the last years or does this remain a niche? Are there any national vintner associations involved in this subject?

K. Distelbarth: Ecological winemaking becomes more and more popular in our region, as well as country wide, though remaining a niche. „Orange Wine”, at least partly produced by many wineries, experiences just the same situation. I might say, that, to the best of my belief, there is no national association for wine growers. There is one uniting all farmers who work more and more in an ecological way.

Back to the „sensual” wine experiences. In addition to the „black kitchen”, a fantastic tasting room, you offer a possibility to rent a holiday apartment. If a guest would ask you about the typical taste of the region, which wine and food combination would you recommend?

K. Distelbarth: Naturally, it is a must to try Rebula. Depending on how the wine has been made and aged, it can assume different flavour shapes, representing various types of products like Rebula sparkling wine, six-month macerated Orange wine or dessert wine. Tasting the full range produced by various wine growers is suspenseful. These most diverse creations mirror the personality and potential of our region – there is something for every taste. Places favourable to wine growing are usually blessed with a wealth of vegetables and fruits. I wouldn’t recommend some certain meal. My advice would be the step in the summer garden which offers treasures like fresh tomatoes, eggplants, paprika, zucchini, cucumbers, cherries, peaches, apricots, figs, plums. Just add some homemade olive oil and let your imagination run wild. Home-baked bread and delicious piece of meat or salami will harmoniously complement the garden jewels. I believe that a perfect natural wine, it does not matter if white or red, fits every meal, whenever one feels like it.

If it comes to the art, how does wine growing influence your artistic activity?

K. Distelbarth: Wine-growing, including marketing, sale, etc., is a time-consuming process leaving us no room for our art. Deep in our soul, we always remain artists exploiting our creativity for our winery and the products. For instance, we design our bottle labels. We timber the wooden boxes for a magnum, and each of them is a unique piece. We designed and welded together the fire bowl which we love to enjoy on cooler evenings. Numerous lights are created and made by ourselves. Likewise, all work around the house is done – as far as possible – on our own.It’s safe to say that prevalently abstract art turned into a day by day creativity, which does not mean that this will remain forever.

Thank you very much for your time! Staying curious about new creations from the Atelier Kramar, we wish you success with your art and wine!